The hourly price data, total value locked and number of unique wallets was obtained through Flipside

The Twitter dataset used covers the period between February 26th, 2021 and April 9th, 2021. It contains all tweets returned by Twitter for a full text or hashtag search over the following terms: Alchemix, AlchemixFi and ALCX.

The code for this piece is available as a Jupyter notebook here.

A quick look at the data revealed a non-trivial amount (~250 or slightly over 2% of the dataset) of scam tweets offering an Alchemix airdrop, followed by complaints of users who got scammed. I opted to leave the tweets in the dataset nonetheless.

1.1.1. Linguistic distribution of the tweets

A sizeable portion of the tweets were in languages other than English. Applying language detection to the dataset shows that 80% of the tweets are in English and the remaining 20% spread accross other languages such as German, Portuguese, Spanish and Japanese, suggesting that there might be potential for growth in adopting a more global outreach strategy. The full linguistic distribution is given below: 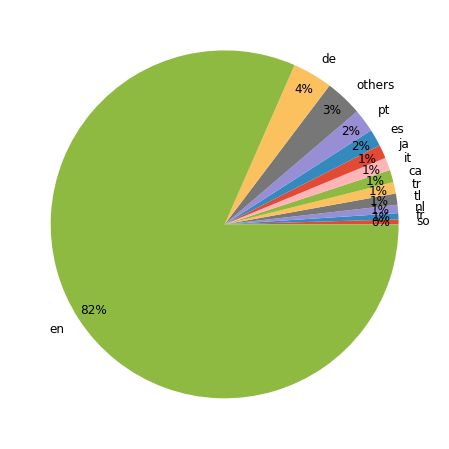 We can also look at the hashtags and tickers most commonly used to see what projects are discussed in relation to Alchemix. I’ll also extract the mentions to see what Twitter accounts are most often interpellated by people discussing the project. Unsurprisingly, the projects that the Alchemix protocol relies on ($ETH, $SUSHI, $YFI, $DAI, $ALUSD) are all well represented as are other DeFi projects ($INV, $RUNE, $RGT). 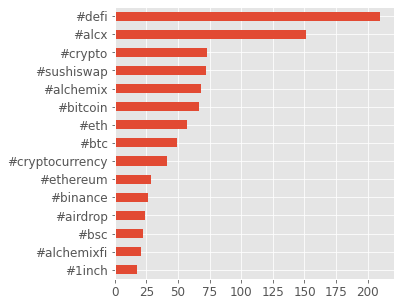 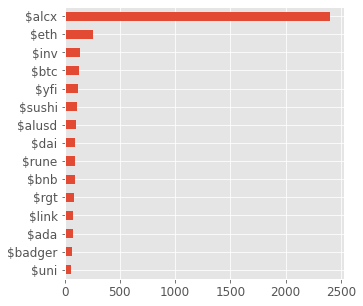 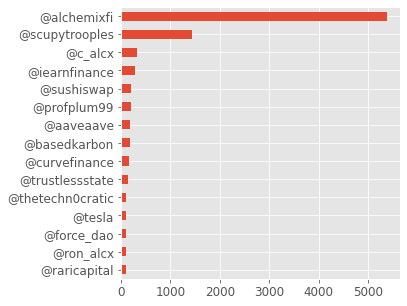 A word cloud can offer a quick, visual answer to this question. To generate one, I apply some basic preprocessing to the dataset (lemmatization, removal of stopwords including those used to as search terms on Twitter). The result shows that there are clearly more people talking about buying than selling: 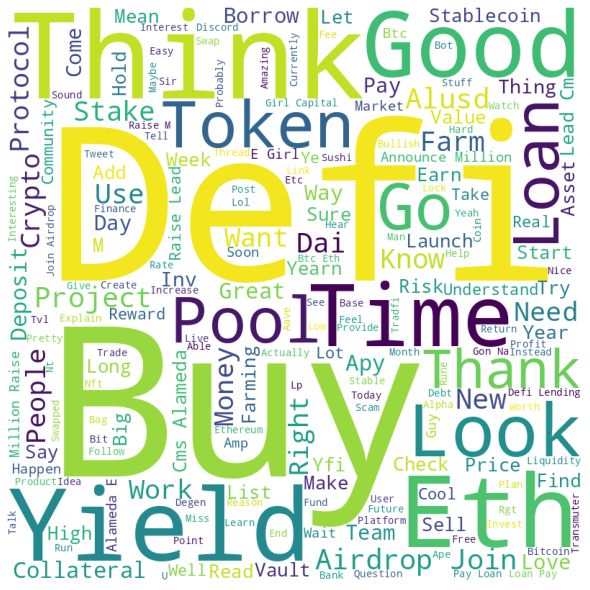 For a more detailed picture, topic modelling can give us a thematic overview by generating groups of related keywords. Running it and selecting for the number of topics iteratively gives the following result:

Topic 0 looks like it is about trading and farming, Topic 1 about Investors and seed rounds, Topic 2 about the Alchemix protocol/product itself and Topic 3 about airdrops - both legit (ForceDAO) and scammy. The proportions of the overall discourse on Twitter that each of these topics account for is given in the chart below: 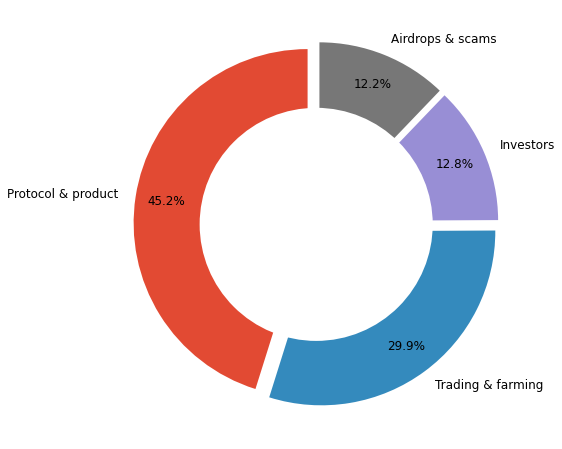 3.1. Correlation between volume of discourse and price

What is the relationship between the volume of discourse on Twitter and the price of ALCX? The two metrics are plotted in the graph below:

The two series are positively correlated (Pearson’s R = 0.22, p = 0.00433) suggesting that changes in Twitter discourse volume influences Alchemix price and/or vice-versa. Running a Granger causality test will let us know if one (or both) of the two variables has predictive power for the other. Granger tests also let us specify lags to account for the fact that the effect of one variable of the other may be delayed in time. I used 6 hour intervals and 5 lags.

While there is no evidence that Twitter discourse influences price, price fluctuations do have a significant effect on discourse volume at lags 1 and 2. This suggests that Alchemix Twitter users are more reactive than proactive - discussing price variations rather than causing them.

Let’s look at other metrics beyond price: total value locked in farming pools and new unique wallets. The periodicity will be daily.

For total value locked, there was no significant evidence of correlation:

For the number of daily new wallets, there was likewise no significant evidence of correlation:

While overall the volume of discourse on Twitter seems unable to influence the price of Alchemix, it is possible that individual tweets could move the price. Elon Musk’s tweet about $BTC and $DOGE, for instance, have caused variations of over 20% in the price of each asset.

It is easier, however, to evaluate the impact of a known tweet on an asset’s price or volume than it is to figure out what specific tweet could have cause a price variation from a large dataset of undifferentiated tweets. The task is made harder by the fact that I did not include metadata such as follower count in the dataset. To nonetheless give this a try, I calculated the price variations over 6 hour intervals for the entire period considered. I then took the largest variations and looked at the tweets posted in the previous hour.

For the biggest positive price variation (+7.25% over 6 hours), the tweets were as follow:

Most of these tweets actually belong to a single thread by @defichadventure about “big brain community members” discussing the maths behind Uniswap v3 on Alchemix’s #off-topic Discord channel: 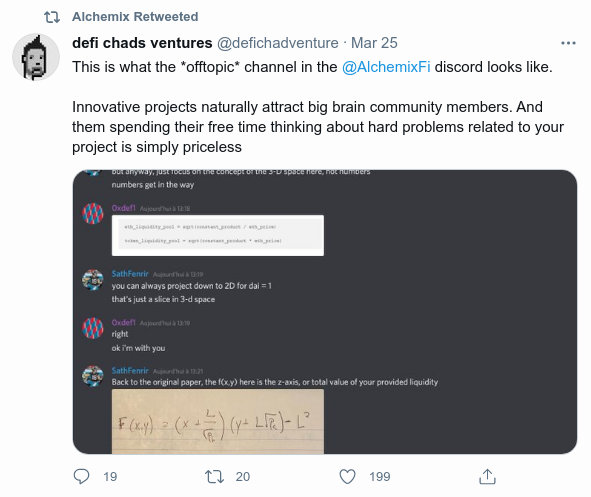 So maybe the quality of the community worked as a strong buy signal.

The exercise proves less meaningful when considering large drops in price as those large negative variations were artefacts of early volatility and concentrated during the first days of the project.

Despite extensive research and efforts, Twitter sentiment analysis is still not fully reliable. The accuracy of state-of-the-art models hovers around 70 percent. Consequently conclusions drawn from sentiment analysis ought to be taken with a grain of salt.

I used a RoBERTa based model trained on Twitter data for sentiment analysis. I only applied minor preprocessing (removing mentions and the hash key in front of hashtags) and slightly transformed the original model’s ouput to obtain a final score between -1 (negative) and 1 (positive) for each Tweet.

The average sentiment score over the dataset was 0.15, indicating an overall positive outlook. The distribution of the scores shows that most of the tweets are actually neutral, concentrated in the [-0.25;0.25] interval, with few overly negative tweets and a large number of very positive tweets: 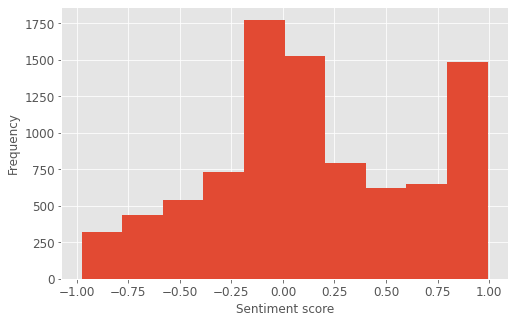 The most positive tweets were as follows:

The variations of $ALCX price and averaged Twitter sentiment over 6 hour periods are charted below. However there was no significant evidence of any correlation between the two series: